In 1855, Laconia was incorporated as a town from lands at Meredith Bridge, Lakeport, Weirs and from a part of Gilmanton. At the first legal town meeting, the town voted James S Hoit, Hugh Blaisdell, Augustus Doe, Horatio N Burnham and John C. Davis as constables. These constables were citizens elected by the community to enforce laws and serve warrants, but little else is know about them.


Prior to 2010 it was believed that no written history of the Laconia Police Department existed. However, in the fall of that year research conducted for a historical display by the Laconia Historical Society uncovered a newspaper clipping in a scrapbook that once belonged to Deputy Chief Frank Bailey. The newspaper article recounted the Department's early history from 1880 to the early 1920s and uncovered the existence of Laconia's only fallen officer, Charles Dolloff. 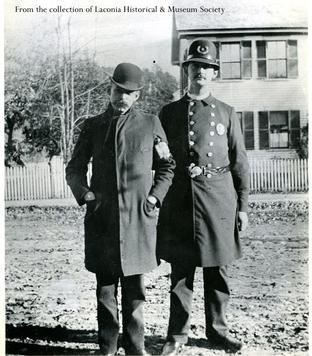 As a result of the Historical Society's display, a new interest was taken in preserving the photographs and historical artifacts of the Laconia Police Department. Many pieces of our collection are on permanent display in the upstairs atrium of the police department. If you are interested in seeing our display or if you have photographs or items belonging to former Laconia Police officers that you would like to have displayed as part of our collection, please contact Robin Moyer.

Request a ReportRequest an accident/offense or arrest report.
Crime Statistics

How Are We Doing?File a complaint or commend an employee.
Start a CareerFind out how to apply for employment.
Government Websites by CivicPlus®
[]